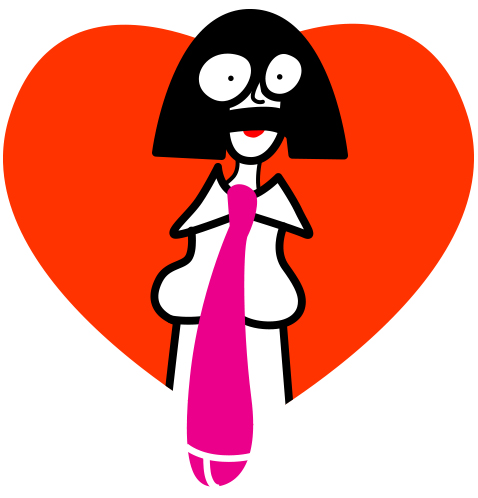 There are a lot of dangerous and really stupid misunderstandings about the factors that influence your success as a designer. I hate that. It’s time to change the playing field: it’s up to us to abandon fake rules and change our industry (and the world) for the better.

Men make more money, are listened to and get more appreciation for their work. It’s easier to be successful as a man. In fact: when more woman start working in a line of business, average wages tend to drop. You could consider women a risk for the industry! So, if you can avoid it: never be a woman.

Yeah, whatever: 50% of the world population are female; that’s hardly a minority. But in design and add agencies we don’t see this 50%: they hire 75% men and 25% woman. And in senior positions it’s 87 vs 13. And that’s stupid. Think of the progress you could make as a company when you would produce actually good stuff for the people that make most buy-or-not decisions: women! (We’ve seen enough adds that picture us as breast carrying stupidity, thank you.) Be a woman! Or be whatever you are. Times, they are changin’.

Be a professional: be cool, be composed, know for sure and keep the helicopter view. And if things don’t go according to plan, blame the others: the brief was unclear, the client didn’t know what they wanted, the money ran out.

I believe it is really professional to truly connect to the work you do. To take full responsibility and be very very personally involved. Be close, loose the distance. We call that embedded design.

Research on crying in the workplace shows, that on many occasions tears show engagement. And engagement drives business. Let’s regards tears as the evidence of professional passion. So fuck that too: cry a lot

Have no doubts. Be cool and rational and think things through thoroughly. Only create when the thinking is done: removing all doubts and risks beforehand. That’s the smart thing to do.

It’s what some consultants and strategist want us to believe. But fortunately that’s rubbish. Doubt everything you do, and try everything you feel you want to try. Act as a way to learn. Talking in meetings is often fake work. Creating is real work. And although knowledge is very important; the route to creating beautiful stuff is not only by gaining even more knowledge. It is about the balance between thinking and making. Don’t think or act, but do both. And hesitate all the time.

Paulo Blikstein (Professor at Stanford) does research into the effects of making for learning. He found that people who both think and make (in a nice rhythm) learn best and most. He did a great lecture you can watch on Vimeo. Watch from 15:40.

Have a fast career; become a director of some sort as fast as you can. Have worker ants make your things, while you harvest money, status and attention.

That may sound great, in reality it sucks. Never trust a consultant that doesn’t master Photoshop. People who don’t master the craft, can never give good feedback on it. Avoid at all cost to become the empty know-it-all. Just work. Write your own brief, write your own content, do your own designs. (And your laundry.) Be an artist designer, they are the ones making the change. Only when you are not dependent on others, you can be strong and autonomous. Be everything. Be independent or loose.

Grayson Perry tells great stories of how learning a new skill or craft enlarged his creative space as an artist. Mastering numerous skills not only makes you independent, it also makes you more creative!

Disruption is a strong and forward energy. Don’t wait for changes that will not happen. Don’t spend time on politics and getting people on board. Move fast and don’t look back.

In reality disruptions hurts people. It makes victims. It got us Airbnb and killed our city centers. And nobody needs a disrupting way to choose a restaurant. Don’t disrupt stuff, but approach problems and industries with tender loving care and fix it with all stakeholders as partners (and not enemies). See a problem? Love and cherish it!

Get inspired by architect and philosopher Christopher Alexander: he says that we love old cities so much because every new building had been built with respect for the existing buildings and human scale. An anti-disrupting approach.

The jeans brand Hiut also took the loving approach: after jeans production in the small town of Cardigan was moved to a cheap labour country (leaving 400 unemployed), Hiut decided to use the knowledge and potential to start an new locally designed and produced jeans brand.

Dress in a manner that matches your profession. People listen more careful when you show your understanding of the zeitgeist in everything you do. Let them know you are part of the forward people!

Yeah, well. I’ve had it with man-buns, dotted polo’s and difficult coffees. And all identical chalked logo’s on identical little coffee and vintage thingies selling shops make me sad. If everyone becomes the same, all our work becomes the same. Do yourself justice and don’t look for the ‘how to be a designer’ script. Burn your retro bike, loose the beard, get a normal coffee and start working. What makes you yourself is your best quality as a designer. And you only get to know this quality by putting the hours in. Fuck hipsters, be you.